A few weeks ago, my friend George Couros wrote a blog post called No Shortage of Road and reading it made me smile because I could really relate to it. Basically, the post is about how he used to be able to run marathons and loved running, and now he doesn’t and it’s painful, and how sometimes it’s hard to see what’s behind you because you’re so busy looking at the people passing you. So true, and it’s inspired me to write my own blog post.

There are quite a few things that I am not a natural at. Things I have tried and they just do not come easy to me: public speaking, chemistry, and running (among others). I like to believe that I have a pretty healthy growth mindset, so it doesn’t mean that I can’t do these things, it just means that I need to work much harder in order to do them well. Public speaking is a prime example. As a kid, I didn’t even talk to people let alone talk in front of people, so when I went to college I took every public speaking course I could find in order to conquer that fear. Now, I can speak in public and am often in front of people, so I joke and say that I live my entire life outside my comfort zone. I am not a natural public speaker, but I can speak publicly.

Running is another one of those things that I am not a natural at and I want so badly to be. Not too long ago I was in a #personalizedPD chat with my friend Jay Posick and he joked about getting back from something like a 12 mile run just for fun. JUST. FOR. FUN. And I instantly thought to myself, I could never do that and was disappointed in my meager three miles that I run (even my growth mindset needs a check sometimes).

I am not a natural runner. I say that because I need to work hard at it. I’ve been running for two years and there are times when I can’t even run the three miles and need to walk some of it. I have asthma and sometimes that acts up, or I get those ridiculously painful cramps in my side (does anyone know how to stop that?!?). But, in looking back, I have come a long way from when I began. At first, I wouldn’t even run outside because I knew I wasn’t fast and I knew my running form was less than stellar. One of my favorite Friends episodes is where Phoebe tells Rachel to go outside and run even though she looks strange doing it. She says, “It doesn’t matter if people are staring at you because it’s just for a second and then you’re gone!”

When I look back at where I started to how far I’ve come, I’m proud of the work I’ve done even though I might not be as good of a runner as others who have been running for the same amount of time. There have been times where it has been literally painful (today was one of those days), but the progress I’ve made has been from hard work, ignoring any feelings that people might be staring, and knowing that running is good for me mentally and physically. I’m more proud of the progress I’ve made in this area than I am in other activities that have come easy to me. I have failed a million times at running my entire three miles, but the times that I have run the three miles are enough of a success to keep me motivated to continue to work hard and get better.
It’s important that we teach learners (adults and children) that it’s not about comparing yourself to someone else, but it’s about recognizing our strengths and weaknesses and and the work you do to grow in these areas. And it’s not about the growth you do in relation to someone else’s standard, but the progress you make according to your own standard. We can choose to use our weaknesses as excuses for why we will never be any better, or we can use them as motivation for growth and change. Just because something might not come naturally to us, doesn’t mean we can’t create our own type of success, and what might be considered successful to one might not be for another, but we should be celebrating those successes anyway. 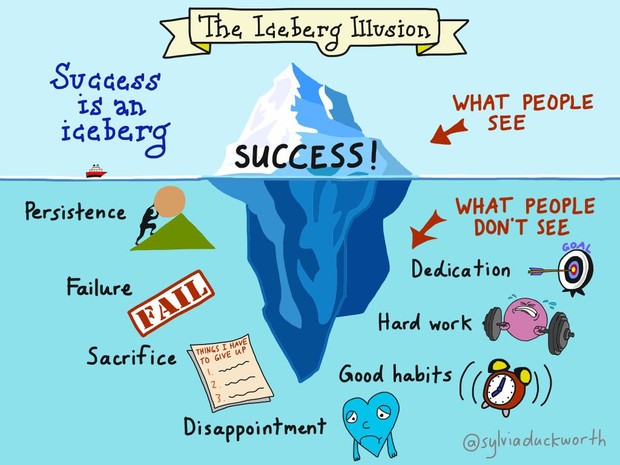